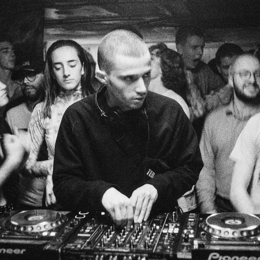 Ytem is a composer, producer, and DJ currently based in Paris, France. He has crafted his own voice within the experimental club music scene with his productions and DJ sets combining cinematic melodies and rough hardstyle-inspired drums, sometimes akin to an horror show score.

Active since 2016, he has released countless singles, remixes, collaborations, including on labels such as Slagwerk, [Re]sources, and Flood.
2018 saw ‘Dangereux’, his debut EP, released on his own Abîme imprint (co-founded with Chams), an illustration of recurring dreams he has had, a duality between atmospheric soundscapes and hardstyle patterns, between immensity and emptiness.

Ytem has toured extensively across Europe, playing in cities such as London, Brussels, and Paris and is often is invited to play radios shows; Circadian Rhythms (NTS), Rinse France, 10Twenty.
His tracks have been played by esteemed artists such as Caterina Barbieri, Zuli, Tzusing, and Dark0. In 2018, he played his first Boiler Room set in which he shifts through genres such as French hip-hop, jersey club, happy hardcore, trance, hard drum, and dubstep.