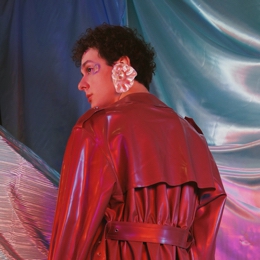 His first EP “Tunes For Solitary Spots” was commissioned by Parisian collective High Heal in 2018, first meant to be a Live A/V experience depicting soft floral patterns accompanied by blooming ambient textures within an intimate setting, the experience developed into a 5-tracks release shortly after.
Now part of the Abîme crew (a record label founded by Chams and Ytem) on which he signed his 2018 “La Nuit” EP, Flagalova has kept his elegant melodies and pushed them further to highlight their ravey essence.
“La Nuit” is the first release where his voice glides in between ethereal melodies and dance rhythms to form gloomy pop compositions.

Flagalova has contributed mixes for online podcasts series JEROME and STOCK71, as well as seen his name on bills next to acts such as Violeta West, Rui Ho, Retina Set, Why Be, and Dis Fig across Europe in Paris, Brussels, Tallinn, St Petersburg, Berlin, or Lausanne.