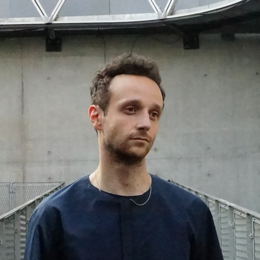 An enigmatic figure of the French electronic music scene, Chams found his calling after a lone trip through the Alps, a place he grew up surrounded by and always knew to revere, made of “sacred places where the beauty and fear of nature merge to shape a unique atmosphere of vulnerable plenitude” according to him.

Since that epiphany, he has been depicting his admiration for that highland through radiant yet cloudy melodies leading surging drum patterns, picturing a subtle contrast between the, obvious at first, positivity and confidence coming from beaming synths, and darker impulses in the form of reverberated speeches and howls, resembling the echo of a vast mountain valley.

2017 saw him release his debut EP “Lettre D’Amort” on Abîme, a record label he co-founded with Ytem on the same year, a six-track melodic journey interwound with slow, thundering beats, and roaring orations featuring his own voice.
He has self-released multiple singles furthering his vision first illustrated through his EP.
Chams has played guest mixes for The Astral Plane podcast series as well as for STOCK71 and Perron Zes (P6) on Bruzz FM in Brussels.